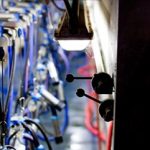 Removing milk with no more effort than flipping a switch

Traditionally, we picture milking as a farmer sitting beside an udder of a cattle or sheep as he/she laboriously pull down the teats of the animal, spouting milk into the bucket below. However, the practice of hand milking has long since been retired from being the sole way of milk extraction to recreational activities for some “good old days” experience. The dawn of Industry 4.0 has ushered in a digital revolution that gives many traditional industries, such as dairy farming, a technological facelift and propels its operations towards a very promising prospect. In Australia, for example, removing milk from cattle needs no more effort than flipping a switch

Automatic Milking Systems, or Robotic Milking Systems, existed since the 20th century with the rise of computer technology. Programs and software that drive these machines are often the results from many hours of trial and error, troubleshooting and experimentation. Furthermore, specific requirements from different farms mean that programs have to be specially written, leading to additional testing efforts. The cost, size, as well as sophistication of the machines themselves often translate to the fact that total replacement is not a practical, or even viable, option for smaller dairy farmers.

To address the above mentioned concerns, AAEON provided the solution in form of the GENE-A55E subcompact board, whose main highlight is its support for legacy software and hardware.

Supporting the long-standing but still widely used Industrial Standard Architecture (ISA) bus, the board offers its users the ability to directly program buses without the need for drivers that are required in newer systems. This feature allowed users to leave their tried-and-true programs and software untouched as instructions are written straight into the bus with no additional modifications necessary to the program’s code. The support of the ISA bus also opened up capabilities such as precision motion control (of the robotic arm and teat cups), digital I/O (for functions such as emergency stopping and LED indications) and CAN BUS (for communications).

Also present on the board is Ethernet technology that grants a true Industry 4.0 experience. With it, any factors that might contribute to an unfavorable milking condition, such as unconducive weather or poor cattle health, can be made known to the user via wireless means so that appropriate measures can be taken even before milking begins. And after it does, data such as the amount of milk collected, the cattle’s physical condition and duration of the process will be sent in real time to a companion app in the user’s PC, tablet or smartphone. In addition, via the onboard expansion options, capabilities including cleaning the cattle before milking to ensure untainted milk and sampling of the collected milk can be added easily.

As an added benefit, and especially applicable in a farm setting, the board’s fanless design negates problems stemming from moving parts. On top of that, the computing unit of the machine, where the board is housed in, can be built completely enclosed, preventing the entry of dust or other matter and allowing it to be washed with water without compromising its functionality. Users of the GENE-A55E may expect a long product life cycle of more than 5 years.

AAEON’s continued support for legacy hardware helped dairy farmers modernizes their operations without the need for a complete overhaul of their assets. Its feature rich board design enhances performance of their machines to include the latest technologies.