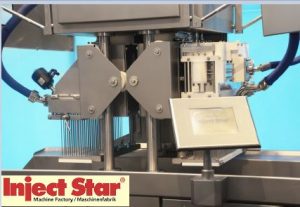 Challenge
Traditionally, automatic pickle injectors have used a crank system to raise and lower the needles used to inject brine or other ingredients into raw meat products. This method results in an uneven distribution of brine in the meat, with a greater amount being deposited at the top and bottom of the meat than in the middle. This occurs because the needle bar is not traveling at a constant speed throughout the crank system’s cycle. Moreover, it is difficult to adjust the stroke length to coincide with the thickness of the meat injected because it requires a mechanical adjustment each time a new meat thickness is processed. Inject Star sought a solution that could evenly distribute brine throughout the raw meat and perform at a rate of one stroke per second. They needed a solution that could run up to 20 million cycles per year and 100 million cycles during its useful life! They also wanted to electronically set the stroke to adjust for different meat thickness.

Application Solution
Exlar’s oil cooled GSX50 actuator was the perfect solution for Inject Star’s high performance requirements. In fact, no other electric actuator on the market could meet these high performance requirements. The GSX50 was able to easily operate at rates higher than one stroke per second even at the longest stroke lengths. With Exlar’s GSX50 Inject Star was able to program the precise stroke length of the actuator to coincide with the thickness of the meat they were injecting. This process was simplified through the use of electronic controls rather than the mechanical adjustment of the crank system. Most importantly, Exlar’s GSX50 actuator evenly distributed brine through the meat by operating at a constant speed throughout the injection cycle.

This is an application success story from Exlar.
Tri-Phase Automation is a distributor of Exlar in Wisconsin.
Contact Tri-Phase Sales or Get A Quote