A solution for short shots in the plastic injection molding process with a Cognex machine vision system.

MVA Stratford is one of North America’s leading suppliers of plastic injection-molded parts for the automotive and related industries. Anyone that has purchased a new car in the last decade has likely touched one of its products when placing coffee into a cup holder or securing their seat belt.

They contacted one of their machine vision integrators for help solving short shots on plastic molded injection machines for automotive components. Short shots occur when liquid plastic is injected into a mold but fails to fill the mold for any number of reasons. As a result, the final part is ejected from the mold before it is fully formed. This poses a significant problem for manufacturers who depend on low inventories and just-in-time component suppliers to keep overhead low and profitability high. Under some contracts, a customer can reject an entire shipment and impose financial penalties on the supplier based on a single short shot. As such, contracts become more common, providing 100% quality assurance is becoming a competitive advantage. 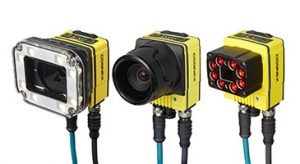 short shot issue, a robot removes a part from the mold and presents both sides of the part to a Cognex In-Sight 7000 smart camera located on top of the mold press. Robot unloading also keeps parts from getting stuck in molds. In some cases, a molded part may not fall out of a mold onto the conveyor even when the pins are fully retracted, resulting in unplanned downtime. The machine stops until a technician can clear the mold or fluid polymer is injected into the open mold, causing considerable downtime and cleanup. When carefully positioned to see both the part from the robot and the mold, a machine vision camera can also verify that the mold is empty, eliminating a common point of failure.

On the press line, a Cognex In-Sight 7000 smart camera processes images using PatMax geometric pattern location algorithms and other image processing functions. It identifies the edges of a part and confirms that the part outline meets specifications. If the part passes, the Cognex In-Sight 7000 sends a “pass” signal to a nearby robot controller, telling the robot to place the part on the conveyor with other good parts. If the part fails, the robot puts the part on a conveyor with scrap parts.