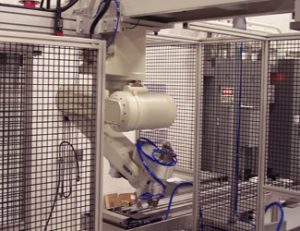 A chucking machine that produces elbow- or tee-shaped pipe fittings was difficult to automate because the fittings, when loaded, need to match the angle of rotation where the chuck happened to stop spinning. The challenge was solved by using a Cognex In-Sight® vision system to determine the angle of rotation of a marked disk that was attached to the opposite end of the spindle. The angle of rotation is passed to a Mitsubishi RV-12 6-axis robot with a 12 kilogram payload that twists its wrist to insert a new part into the chuck in exactly the right orientation. One robot now loads and unloads two machines, freeing up two operators who are now able to perform inspection tasks.

Integration between robots and vision systems 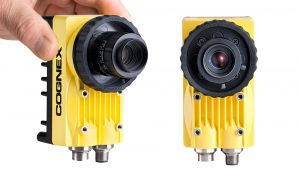 Mitsubishi robots and Cognex In-Sight vision systems have been integrated through a joint development effort between Cognex and Mitsubishi Electric. Mitsubishi Melfa-Vision software incorporates robotic programming software and Cognex In-Sight Explorer software to set up the robot and the vision system simultaneously as an integrated solution. This new approach makes it much easier to create vision-guided robotic applications with capabilities such as locating and inspecting parts.

Tri-Phase Automation is a distributor of Cognex and Mitsubishi Electric products in Wisconsin.  Our Engineers are happy to answer your questions or assist you with your application.