The requirement was to increase the speed and positioning accuracy of storage and retrieval systems, as well as to allow products to be definitively identified whilst still in the storage bay. All the requirements were met with SICK sensor systems. 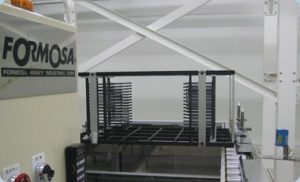 Formosa Heavy Industries Corp., Taiwan, a company in the FORMOSA Group, has been developing, producing and installing automatic warehouse systems worldwide since 1982. Their products include storage and retrieval systems (SRS), automated guided vehicles (AGV) and the racks themselves. In order to optimize the process speed in the high-bay warehouse, Formosa Heavy Industries Corp. needed to increase not only the speed of the storage and retrieval system itself, but also its positioning accuracy. These objectives were to be achieved by replacing the incremental encoders used previously with fast absolute encoders. Also, the customer wanted maintenance costs to be minimized. The greatest challenge, however, involved adapting the interfaces and control logic used for the nominal/actual comparison. It was a further wish of the customer in this project for the system’s efficiency to be increased by specifically minimizing order picking errors. Accordingly, bar code readers were installed on the load carriers of the storage and retrieval system for some applications. These would identify the products to be picked locally, i.e. at the storage bay itself. SICK developed an outstanding solution for this together with the customer.

Application Solution
The sheer number of DME distance sensors installed successfully in high-bay warehouses all over the world represented another argument that persuaded the customer to use this solution in its storage and retrieval systems (SRM) in future as well. In this case, the DME3000 precisely met the customer’s requirements because it communicates its absolute measurement values in a stable manner via an RS-422 interface, thereby allowing high-speed and highly precise position changes by the storage and retrieval system (SRM). Furthermore, the maintenance-free design of the DME3000 not only won over Formosa Heavy Industries Corp. itself, but also its own customers. It goes without saying that this reduces the maintenance time required. Last but not least, the overall package from SICK was rounded off by using a CLV432 bar code scanner which reads the bar codes on the load carriers within the storage bay with extremely high reliability. In this case, SICK cooperated with Formosa Heavy Industries Corp. to meet the set objectives, thereby significantly boosting the end users’ confidence in the overall system.

This is an application from SICK.
Tri-Phase Automation is a SICK distributor in Wisconsin.
Contact Tri-Phase Sales or Get A Quote