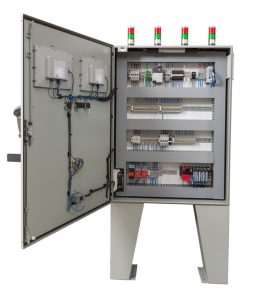 A top semi-trailer manufacturer wanted to replace a PC-based control system with a PLC, a programmable logic controller system. Their legacy control system started to fail too frequently. As a result, this led to costly downtime, manual repair tasks and extra paperwork. In addition, the employee who had developed the PC-based system was no longer with the company and no one else knew how to maintain it.

The updated Mitsubishi Electric PLC systems not only delivered more advanced automation, but also resulted in a speedier, more powerful and user-friendly database.

The company upgraded its process control system without any production interference across three plants in three cities. With the PLCs from Mitsubishi Electric, the manufacturer greatly reduced unexpected downtime and eliminated many manual tasks and paperwork, which were vulnerable to human error. The system also automated data capture with a built-in barcode scanner to boost productivity.

Tri-Phase Automation is Mitsubishi Electric diamond distributor partner in Wisconsin and Northern IL.
We can answer your questions or provide you with a quote.